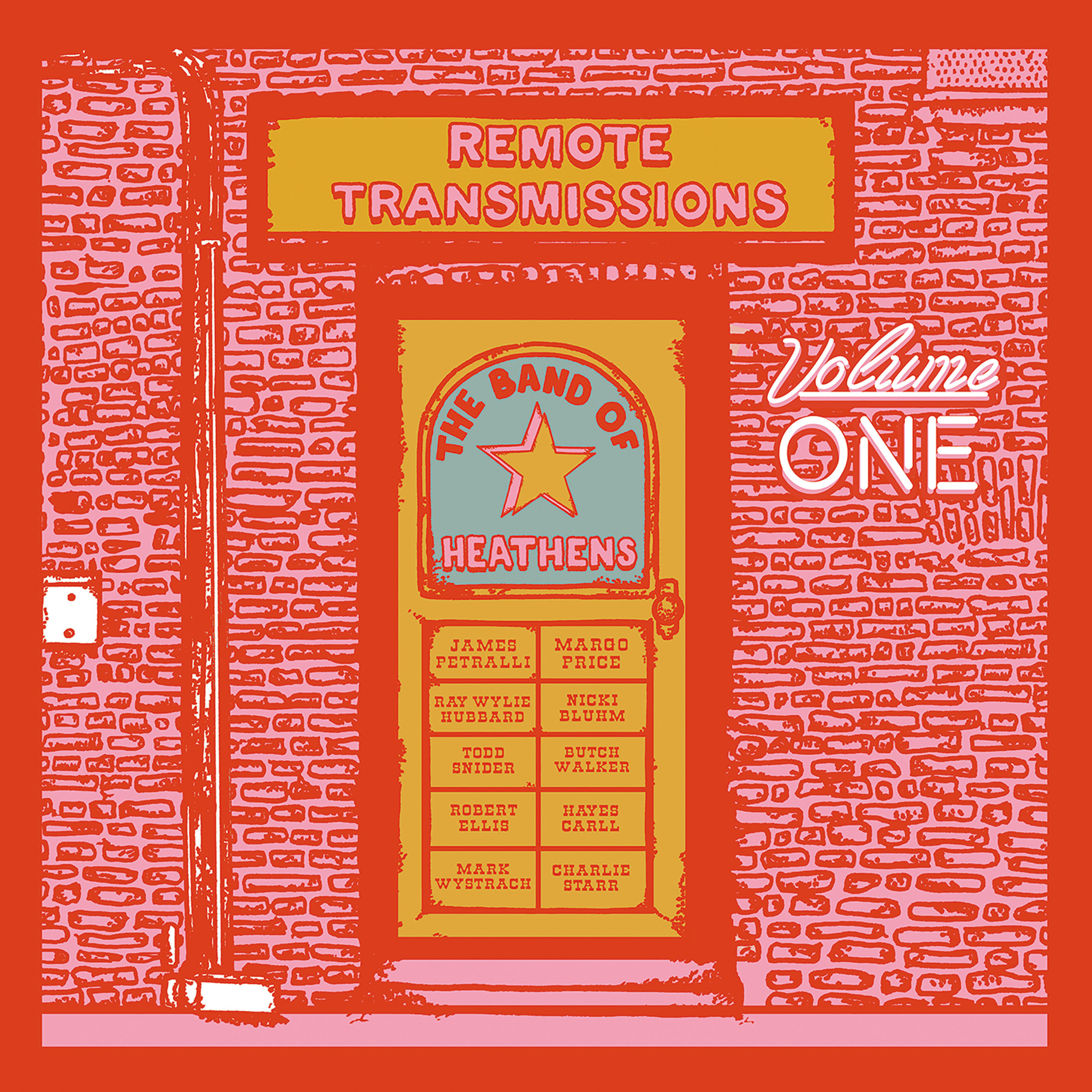 What do you do when your entire life as a musician is suddenly put on hold? For The Band of Heathens, the answer to the big existential question of 2020 was simple: put on a show. For fifty-two weeks, every Tuesday night, the five-piece group came together via Zoom from their respective homes – in California, Texas, Tennessee and North Carolina - to host the Good Time Supper Club, a ninety-minute variety program. The segment of the show, called Remote Transmissions, became a much-anticipated fan favorite each week. And it is now the title of a new album release (volume one of a planned series), featuring covers of ten classic songs by artists including Margo Price, Todd Snider, Ray Wylie Hubbard, Nicki Bluhm, Hayes Carll and Charlie Starr. The Band of Heathen’s Remote Transmissions Vol. 1 is set to release Feb. 25, 2022.

“I think our survival instinct just kicked in,” says guitarist-vocalist Ed Jurdi. “There was a calling for connection and return to some kind of normalcy, which meant getting together with the guys in the band and collaborating, finding a medium to be creative. The onset of the pandemic made us say, 'How do we create things and share them with our audience?' It was nice to be able to use music as a connective thread and something that's healing. We were doing it for ourselves, but the greatest benefit was how it created this community for us to hang out with our fans.”

Guitarist-vocalist and fellow founding member Gordy Quist agrees. “Everyone was scared and uncertain about what was happening, so the show was like a release, where we all connected and forgot about the stuff going on around us. We couldn't play music together in the same room, so it was like trading songs, having a drink segment, we were even reading Shakespeare - just doing totally ridiculous things. At some point, we decided to bring in guests for an interview, and that turned into 'Hey, let's pre-record a music video of a cover song with each of them.'”

The record kicks off with an irresistible one-two punch - White Denim's James Petralli bringing his joyous rasp to Little Feat's “Rock and Roll Doctor” while the band expertly navigate the tune's complexities, right into the greasy guitar shimmy up of Nicki Bluhm and Ed Jurdi's duet on “Tumbling Dice.” The highlights just keep coming - Butch Walker rendering “Night Moves” with the crackling, dynamic range of a radio preacher, Margo Price's take no prisoners roar through Lucinda Williams' “Joy,” Midland's Mark Wystrach channeling Marty Robbins' easygoing baritone charm on ”El Paso City” and Robert Ellis' Petty-like drawl on “Walls” (“Some things are over / some things go on” seems like as concise a summary of last year as you can ask for).

Quist says, “We didn't try to reinvent the wheel. Normally, with covers, we would've looked for that certain twist to make the songs radically different from the originals. But we couldn't really do that, because we weren't in the same room. So the versions are pretty close to the original arrangements. There was a time crunch with producing a show every week. We didn't even think about it becoming an album.  But all the guests stepped up and did a great job. So it was really hard picking ten songs for this record.”

“Making records is always about cataloging any point in time,” adds Jurdi. “We wanted to celebrate the unique collaborative aspect of the show. What better way to document the last year than with these songs?”

The high quality audio and video of the Good Time Supper Club (episodes are archived on their YouTube channel) helped the band to forge a bond with their fans that went beyond their initial expectations. “It was amazing how our people joined us and literally created a financial safety net for us,” Quist says. “They took care of us. It kept everybody in the band paid during the pandemic, because of the show, because of donations from the fans. We were dumbfounded and grateful beyond belief.”

“At a show, someone comes up to the merch booth and you get to meet them for a minute or two,” says Jurdi. “But through doing Good Time Supper Club, and with Gordy and I doing personal Zoom concerts, we got to get in deeper with some people in a really personal, beautiful way. At first, I thought of it as them helping us, by financial support and with morale. But as we got deeper into it, they were more like, 'No, you don't understand, you guys are helping us. We look forward to this every week.' There was so much anxiety and existential dread going on in the world. For a couple hours on Tuesday night, we could leave that behind.”

In October, the band released the first single from the forthcoming album: “Papa Was a Rollin’ Stone,” featuring Ray Wylie Hubbard. Today, with the announcement of Remote Transmissions, Vol. 1, the Heathens revealed the project’s second single, “Tumbling Dice,” featuring Nick Bluhm. The tune is available for streaming/download here.

Pre-orders for Remote Transmissions, Vol. 1 are available now here. Upon its release, the album will be available for purchase wherever music is sold.

*Evening with The Band of Heathens and Nicki Bluhm