Article Contributed by The Garcia Project | Published on Sunday, December 15, 2019 A new album is being produced by Maria Muldaur and The Garcia Project and will be a collection of spiritual songs that Jerry Garcia performed throughout his life. The artists on the SPIRIT album will include (in alphabetic order):

• Peter Rowan (Old and In The Way)

Jerry Garcia performed many inspirational, spiritual and gospel songs over the course of his life. This album is a loving tribute to those songs and to Jerry Garcia’s beautiful spirit. The album will feature The Garcia Project’s (nationally touring tribute to classic Jerry Garcia Band) Mik Bondy and Kat Walkerson along with Maria Muldaur, The Garcia Project and other very special guests! Maria Muldaur will produce and direct the album.

“Hearing Jerry Garcia play and sing live for the first time, was an experience that I will never forget.” – Mik Bondy

I know that many others have enjoyed the passion and musical magic that Jerry Garcia brought to everything he did in his life. When I discovered the Jerry Garcia Band, in 1987, I was amazed and instantly hooked on the songs that he performed with his band and the way he performed them. We used to call going to Jerry Garcia Band shows “Jerry's Church” and it really was a church-like experience for many of us. We would get our spiritual fill and guidance from the songs and messages that Jerry brought to us. Back then, we were treated with songs like Sisters and Brothers, The Maker, Throw out the Lifeline and Lucky Old Sun. These songs helped bring a positive, reflective and bonding experience to us all.

Here is the first track, from our upcoming SPIRIT album! It is our version of “Throw Out the Lifeline”, which pays tribute to Jerry’s acoustic Americana and bluegrass stylings, and his collaborations with great artists such as Peter Rowan. Our version features Peter’s guitar and lead vocals backed by Kat Walkerson & Maria Muldaur. Mik Bondy on acoustic guitar, Dan Crea on bass, Jason Crosby on piano (Phil & Friends, Moonalice) and Jacob Jolliff on mandolin (Yonder Mountain String Band).

You can listen to a bit of it here and purchase the whole song for only $.99 on ITunes:

Every purchase will help The Garcia Project with the final production on the album. Thank you so much for your support!

Throw Out the Lifeline

For more information and to PRE-ORDER the complete album, click here: http://thegarciaproject.com/spirit The Garcia Project announces their 2019 DAYS BETWEEN TOUR The Days Between August 2018 Tour Maria Muldaur to join The Garcia Project for Special Show 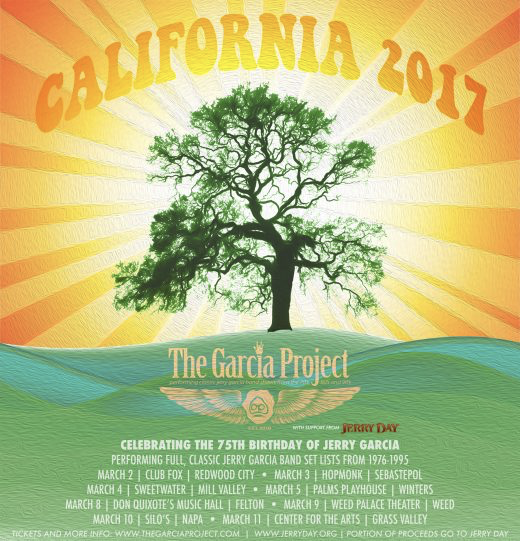 The Garcia Project in Hartford CT on June 4 Melvin Seals and Shirley Starks to join The Garcia Project for a special night! The Garcia Project - Phase One of Spring Tour Announcement